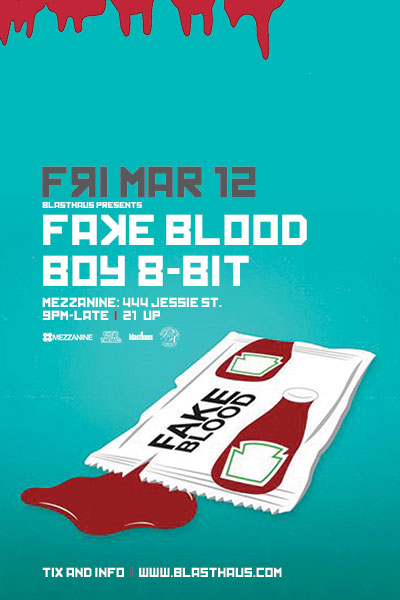 This past Friday, I had the pleasure of seeing Fake Blood and Boy 8-Bit in concert at Mezzanine in San Francisco. As such, I’ll be giving a short concert review here. This will be a good way of introducing some of Fake Blood’s old music.

First off Fake Blood is the nickname for Theo Keating. Keating also produces occasionally under the name DJ Touche, but most of his house stuff is under Fake Blood. In concert, he was amazing. Most DJs stick to their roots in concert, and Fake Blood is no different playing an assortment of his tracks, his remixes, and similar songs that have influenced him. He has a very pure electro sound, and his concert showed that off to the max. Here are a few of the highlights, starting with the best.

Hands down the best moment of the entire show was when Keating played “I Think I Like It.” It’s by far my favorite Fake Blood track, with a crazy mix of electro and funk similar to the stuff Duck Sauce has been putting out recently. He brought it in slowly, so everyone in the crowd literally lost it when it finally dropped. I’ve never seen so many people jump in unison. Absolutely awesome.

The next song was Fake Blood’s entry song, and it got the crowd pretty hyped. It’s generally considered his theme song, although I definitely don’t think it’s his best work. Still a good song nonetheless.

The next song is not a Fake Blood track, but it is one of my favorite songs of the past year and Fake Blood dropped it nicely in his set. Technically, Fake Blood played the Chilly Gonzales piano remix, but the original is just so good, I couldn’t bring myself to not post it. The song is “Waves” and it’s by Erol Alkan and Boys Noize. It’s a pure German electro song that just doesn’t let up for 8 minutes straight.

Lastly, as I think about everyone expected, Fake Blood ended with his classic – “Mars.” You’ve all heard the Herve remix posted several months ago, so I’ll post the original. The crowd was waiting for this song all night, and when it finally dropped, thirty people climbed on stage immediately and started dancing right up there with Fake Blood.

Overall, an absolutely awesome concert. I’m listening to “I Think I Like It” right now and I think you should be too.