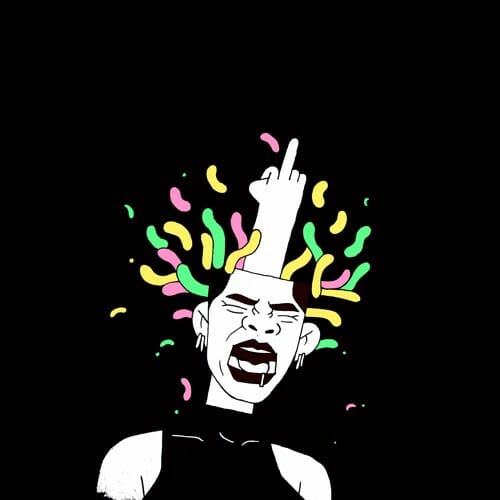 Across any genre, there are sounds that blend together seamlessly, and others which inspire melodic fusions that sit something more like oil and water. Bonzai, a relative newcomer to the game, possesses a talent for surpassing these atypical pairings. Born in Indiana, raised in Ireland, and now living in London, the young artist credits her colorful background as the reason behind her incredibly assorted sound. Her first EP arrived in 2015 and saw tracks, “Doses” and “Nikka,” make their way onto Annie Mac’s Hottest Record in The World. Now Bonzai has seen a third track featured, in conjunction with the release of her second EP, Sleepy Hungry, via Mura Masa’s Anchor Point label.

Sounding as if it were intended to be a score for nightmares, set amongst a dark warehouse rave in Bristol, the EP’s opening track,“Daniel Gets It Wrong,“ is, in a word, relentless. The unforgiving nature of the beat pairs fluidly with the song’s bewitched vocals while also proving an unlikely counterpart to the twinkling notes that kick things off.

On the other end of the spectrum, closing track, “Where Are U Now,” begins as a soulful vocal release, elevated by sonic, beckoning chords. The lofty thumping of a bass drum accentuates the song’s merciless build, sublimely holding on for one count too long before giving way to the drop.

Cementing Bonzai’s reputation as being impossible to categorize, other standouts from Sleepy Hungry include R&B jungle-terror offspring, “Kassi,” and old-school acid house influenced, “No Rest.” Drawing inspiration everywhere from the Chemical Brothers, to King Krule, and Ashanti, Bonzai has succeeded in developing an authentic sound out of a seemingly unconventional mix. Listen to the EP in full, here.

Mura Masa – What if I go? (Original Mix)