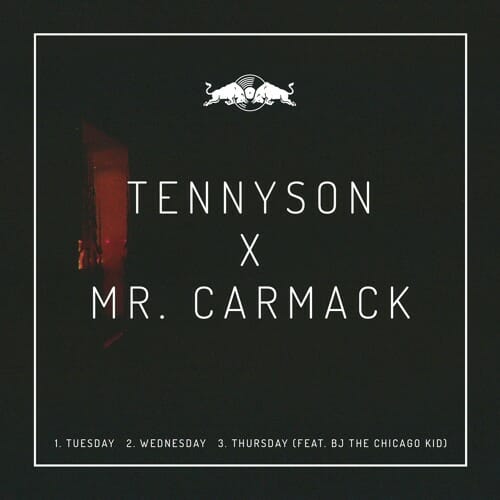 Like any endeavor, producing electronic music can, at first, seem entirely overwhelming. What separates the discipline’s wheat from its chaff, however, is the way in which artists tackle the steep learning curve. Having to design one’s own sounds, find samples, and alter each to fit into a cohesive final track is an incredibly difficult thing. After all, producers and recording artists were, for a long time, two distinct professions. When starting out, many producers place limiting factors on themselves, such as only using a select amount of synthesizers, one drum machine, relatively few plug-ins and effects, et cetera.

Limiting factors, however, can prove to be challenges of their own, especially in regards to time. As such, Red Bull Sound Selects recently challenged Mr. Carmack and Tennyson to produce three tracks in three days and the trio has delivered.

While Mr. Carmack is perhaps best known for his ability to create trippy, experimental bass music, his releases often feature jazzy, sedate originals as well, going so far as to flip Herbie Hancock’s “Watermelon Man” in one of his recent releases. Carmack plumbs this side of his abilities to match Tennyson — comprised of Luke and Tess, a brother-sister duo — who are known for their own heavily jazz-influenced, atmospheric productions.

The three tracks the trio produced are each named for their days of release— “Tuesday,” “Wednesday,” and “Thursday, respectively. After a quick feint into the energetic, “Tuesday” reveals itself to be a meandering, serene affair, laced with LFOs over mellow electric pianos. “Wednesday,” too, plays with listeners’ expectations, opening up atmospherically before reveling in minute flourishes of percussion and electronics as a whining synth line begins to float over top to announce an energy increase (though ultimately morphing once again as the track continues).

“Thursday” is perhaps the most conventional track of the triad, though it possesses a number of identifiable twists from Carmack and Tennyson. Featuring silky vocals from BJ the Chicago Kid, what could be a standard RnBass affair is instead marked by Carmack’s judicious and tempered introduction of interesting sounds with dazzling piano courtesy of Tennyson’s Luke. The standout element of the track, however, is a tour de force feature of Tess’s drumming, which manages to be simultaneously busy and frantic, but also maintains the loose vibe of the rest of the production.

Collectively, the daily track collection from Carmack and Tennyson serve ultimately to illuminate three musicians at the tops of their respective games. Though the artistic pairing is not necessarily an obvious one, the chemistry between the group is palpable. These three tracks serve as proof that much is possible within a 24-hour span – particularly if you have the work ethic and energy of the three artists involved.

Skrillex and Mr. Carmack spent a day in the studio together

Skrillex teams up with White Sea and Tennyson to remix ‘Stranger’