When Pretty Lights‘ sold-out destination event Island of Light was canceled due to hurricane devastation on Puerto Rico, event producers decided to turn their awareness towards relief efforts and raising money for victims.

As it happens, the production team for Island of Light, or the folks at Silver Wrapper, are also be the producers  over Suwannee Hulaween. Therefore, for the fifth annual halloween gathering, taking place the weekend of October 27 at Spirit of Suwannee Music Park in Live Oak, FL, the festival will also give those at home a chance to not only join in on the action…but to do so through the act of giving.

This year, Silver Wrapper will be webcasting three String Cheese Incident sets as a pay-per-view stream, Oct. 27, 28, & 29, 2017, with every dollar being donated to hurricane relief funds. Dubbed the “Couch Tour,” one of the three streamed sets will include String Cheese’s “Night of the Loving Dead” themed set.

Hulaween is also running a food drive for a local Florida charity and a pre-party with all proceeds going to the same cause. The producers believe Hulaween has the capacity to raise a lot of money for victims in their home state of Florida as well as Puerto Rico. 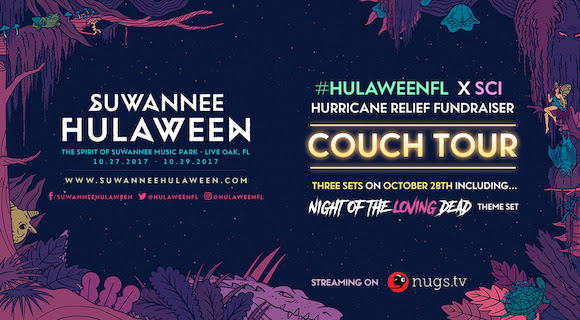