Who exactly is Dorfex Bos?

Dorfex Bos may not be a household name in electronic dance music, nor may he ever wish to be. However, the Madison House-signee is one name in underground bass that we’ve been keeping tabs on here at Dancing Astronaut since appearing on Bassnectar‘s tenth full-length studio album, Into the Sun, back in 2015.

“Lorin [Ashton] is an absolute beast. He’s a genius,” Dorfex Bos told us in a recent interview. “I’ve never met someone with such a clear vision of what they wanted and the skills to make it happen so fully.”

Dorfex Bos is Angelo Tursi, an artist emerging from the early 2000s West Coast bass scene. His music is easily discernible by its eclectic, heavy sound stamp that weaves together elements of lush downtempo, dubstep, and left-field electronica.

But, like most free form bass music artists, don’t ask Dorfex Bos to force himself into any narrowly-defined categories. “I don’t really identify completely with any genres,” Tursi says of his experimental sound. “I’m known for making deep, trippy, cinematic tracks that I guess is considered ‘bass music,’ but I’m not really trying to put myself in that box.”

The Brooklyn-based beatmaker further alluded to the bass music genre as one that is as loose and expansive as it is subversive and very much open to creative interpretation:

“I feel like ‘bass music’ as a genre is very much solely focused on the body experience. I like to weave in a melodic and harmonic element that takes the whole experience a little deeper. My music has [an] emotional flavor that I feel is missing from a lot of ‘bass music.’ “

“Okeechobee was absolutely bonkers. I was set to play a smaller, late night stage…and there were a few thousand people there. It was a beautiful sight. It was a super tight, deep set.”

Dorfex Bos is known by many for his iconic collaborations with Bassnectar, including the self-titled track “Dorfex Bos,” which first appeared in 2004 on Diverse Systems of Throb, along with “Horizons” and “Other Worlds“— two mind-melding numbers that appeared on the recently-released Reflective EP.

“Our last two collaborations, ‘Horizons’ and ‘Other Worlds,’ were made in my bedroom studio on two separate occasions. We would start playing with ideas and very quickly a very clear and defined sound would emerge. It’s crazy making music with him because I have to keep in mind that tens of thousands of fans are going to experience these tracks in arenas and stadiums and you have to think about how they are going to sound in huge venues. It’s different than writing music for clubs. It’s a bit of a mind fuck.”

Recently signed to the Boulder-based powerhouse booking and management firm, Madison House — who also represent electronic music careers of Bassnectar, Clozee, Crywolf, Golfclap, Mt. Eden, Polish Ambassador, The String Cheese Incident, William Black, among many more — Dorfex Bos now brings his debut EP, Opinions, to the table. He is poised to stand alone as a new power player within his area of expertise.

“This EP is very special to me. Each track encompasses a specific and unique combination of mood and groove.”

The four-track project is an aural representation of a roundtable discussion on the sheer eclecticism and diversity of sound within the underground bass music scene. Rather than a cohesive journey of musical story-telling, what Tursi is laying down in his Opinions EP is a track-by-track catalog of playful sonic surprises with ever-evolving synth patterns, broken beats, and newly emerging bass lines around every turn. Perhaps no one puts it better than Tursi on his Opinions EP:

“It feels like a cocoon-deep welcoming, charged with just the right kind of rhythmic energy to keep it moving forward into the unknown. It’s music made for dimly lit dance floors or late night car rides down empty highways.”

Tursi’s auspicious sound sits on the horizon of where bass music is heading: It’s a purview into another world, catalyzed by a full-bodied, all-encompassing listening experience. Opinions serves as his artistic vessel into charting this plane: It’s a sonic mosaic that Dorfex Bos pieces together layer by layer, bit by bit, through each of his meticulously-crafted productions.

Take the EP’s eponymous leading track — a stunning, yet jarring composition laced with a sounds often mirrored by Bassnectar himself in his recent work. Complete with gritty electro-style synths, robust, grounding basslines, and highs that resemble the emergency sirens of a national weather warning system, it resembles an aerial adventure through hypnotic sound fx. “It’s so big and expansive, it feels like you’re soaring on the back of a dragon very high up in the sky and you can feel the wind whipping through your hair,” says Tursi of “Opinions.”

Building upon the steady momentum set by the EP’s beginning, “Teen $pirit” begins much lighter with a keen focus on arpeggiated chords and captivating toy-box synth work. After the song’s first drop is where the intensity culminates into a more foreboding mood; yet, with the continuous use of light-hearted synths, users need not be apprehensive in giving themselves over to the song’s darker elements.

“Cyalafalora” subsumes the EP’s most mysterious appeal. Laid across an experimental landscape, the track features outer space bass elements, retro 1980s synths, like something out of Stranger Things, and laidback tones that allows the listener to explore the unmapped terrain of the human psyches. Upon the song’s second drop, Dorfex Bos takes a complete 180-degree turn into what sounds like a completely different song.

Finishing off the EP is “Ralph’s Dance,” complete with a dark, anthemic quality that only Dorfex Bos can replicate. It catapults listeners into a side show circus tent, as if one is lining up to watch a traveling freak show somewhere in an arid desert county in the 1950s.

In short, Dorfex Bos’ breakout EP is a statement of what is to come from the rising artist. Though eclectic as ever, that isn’t to say that the EP is disjointed by any means. For Opinions features a unique, experimental, and amorphous sound so as to explore the deeper possibilities of free form bass. “It’s thick, it’s bouncy, it’s deep, it’s dreamy,” says Tursi. 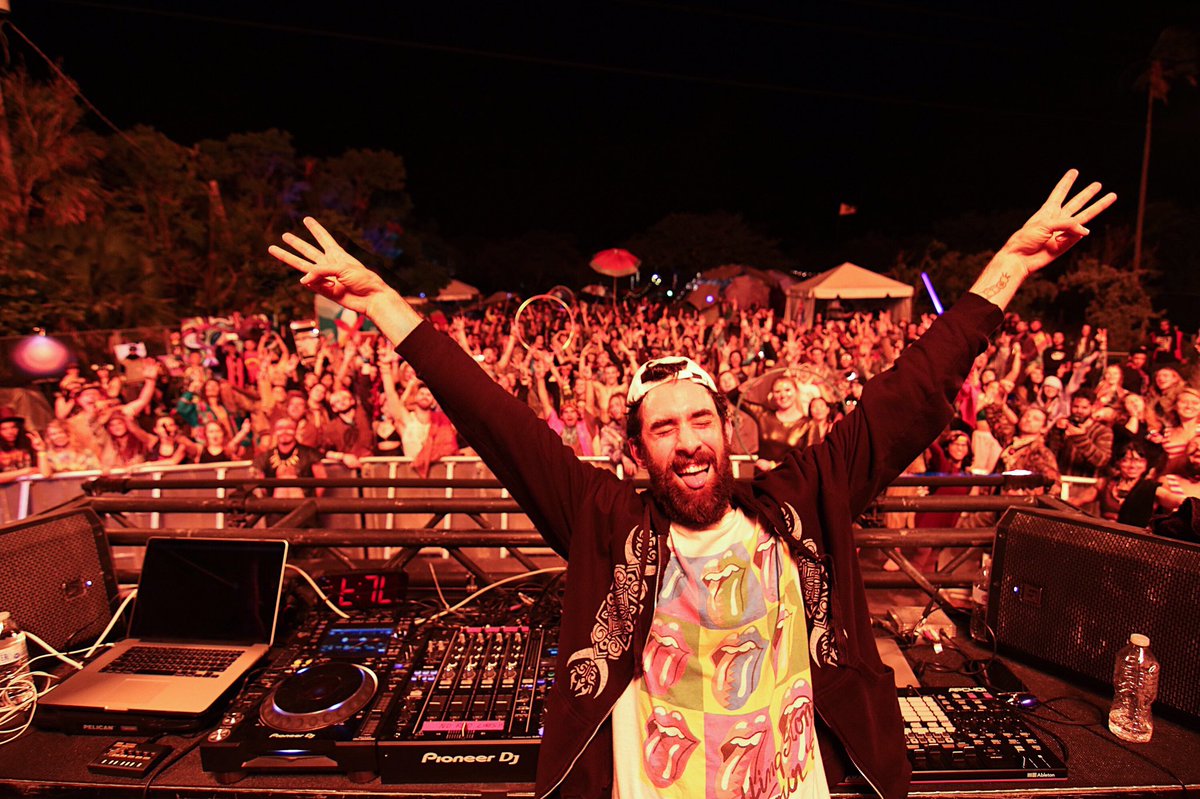 “I wanted to present a mini-journey of what Dorfex currently represents and what I’m doing in my live sets — which is [using] very big, expansive beats with a mysterious, almost haunting, narrative running through it.”

Still in the early development phase, Dorfex’s live show is a rollercoaster ride of raw, undefined emotion and low-end frequencies that incorporates original tracks from Tursi’s sizable back catalog of music. Visually, there is still much left to map out for the young artist: “Up to this point, I have been the sole designer of all Dorfex visual art. I enjoy having a lot of creative control over how my work is presented. But I do look forward to collaborating with the right artist in the future if that magical synergy is there.”

“The live show is very me in that it will be an interesting dichotomy of ‘dark’ and ‘light’ imagery.”

Tursi’s approach to his live experience is laced with the kind of DIY sensibility that runs deep within the spirit of the underground bass scene. It is a sense for which he also takes cues from Tipper, whom he has opened for in the past, and Bassnectar, who he will open for during night two of Freestyle Sessions. On playing the upcoming event, which will be full culty bass heads:

“I’m super excited for Freestyle Sessions! I’m playing on ‘Dreamtempo’ night so it’s going to be a dreamy, bouncy set. I’m not really nervous about it, a lot of Bassnectar fans come out to my shows and they are usually super engaged and excited about me playing.”

As for his other upcoming appearances throughout the year, Dorfex Bos is also booked as direct support for The Glitch Mob on their new album-accompanying world tour, dubbed “Blade 2.0,” a interactive live music spectacle with visuals powered by Dell and an immersive VR experience from Strangeloop Studios.

“I’ve been friends with Ooah and Boreta for a very long time, about 15 years,” Tursi explained matter of factly. “They got in touch with me because their original support Elohim was unable to do [one particular] date.”

Dorfex Bos was beaming at the opportunity to play on The Glitch Mob’s cutting-edge stage set-up. “It’s a game-changer,” alluded Tursi. “I very quickly said yes because I know they have a very open-minded fanbase that would be down to go on the Dorfex journey, which is going to lean a little on the cerebral.”

With mentors like Tipper, Bassnectar, and The Glitch Mob — each with their clearly-defined respective sounds, and their shared roots in psychedlica and new-age spiritualism — there is no doubt that Dorfex Bos is one breakout artist whose climbing the swift ladder to success. Not only is he set to expand the sonic worlds of the three aforementioned artists, who all share a similar musical flavor, as well as crossover fanbases, DA asked what other artists made Tursi’s list of collaborative hopefuls.

“I’d love to work with Four Tet… he’s been a big inspiration to me for years. I’d love to make something with Potions (of the Lab Group)… he has such an amazing sense of sound design. Some other names I’d like to throw out on my collab wishlist… ELWD, Nils Frahm, EPROM, Oneohtrix Point Never, FlyLo, and Björk.”

So what exactly is a Dorfex Bos?

“I like my audience to experience ‘feels,’ and not just solely a beat to bang their heads to. It’s a fully sensory experience.” – Angelo Tursi

Tursi conjured up his moniker from a wildly imaginative place. The root, “Dorfex,” refers to some imaginary rural county in the British countryside, complete with lush rolling hills and dew-filled forests; the stem, “Bos,” he’s always thought about in terms of a fantasy computer-coded language. Juxtaposing the two creates a kind of elemental synergy — between nature and machine — for the artist. It’s a space Tursi says he enjoys dwelling in, both mentally and physically.

As for Dorfex Bos’ vibrant future, 2018 has much in store for the Brooklyn-based producer, including several more releases and collaborations for which the artist remained rather vague about going into detail over.

One thing we know for sure of the left-field bass producer is that he has a clearly-marked sound, with a penchant for low-end vibrations, and a definitive map for where he’s going.

How this will come to take shape for the audience?

Only time will tell.

But Dorfex Bos is not just a moniker, or even a man behind a moniker. According to Tursi, it’s a fully immersive experience: “The Dorfex Bos experience is a balanced combination of bass heavy beats and a rich cloak of melodies and harmonies that feel very much like a film score.”

Cinematic and fully sensory, on the one hand. Heavy, cumbersome, and yet fully palatable, on the other.