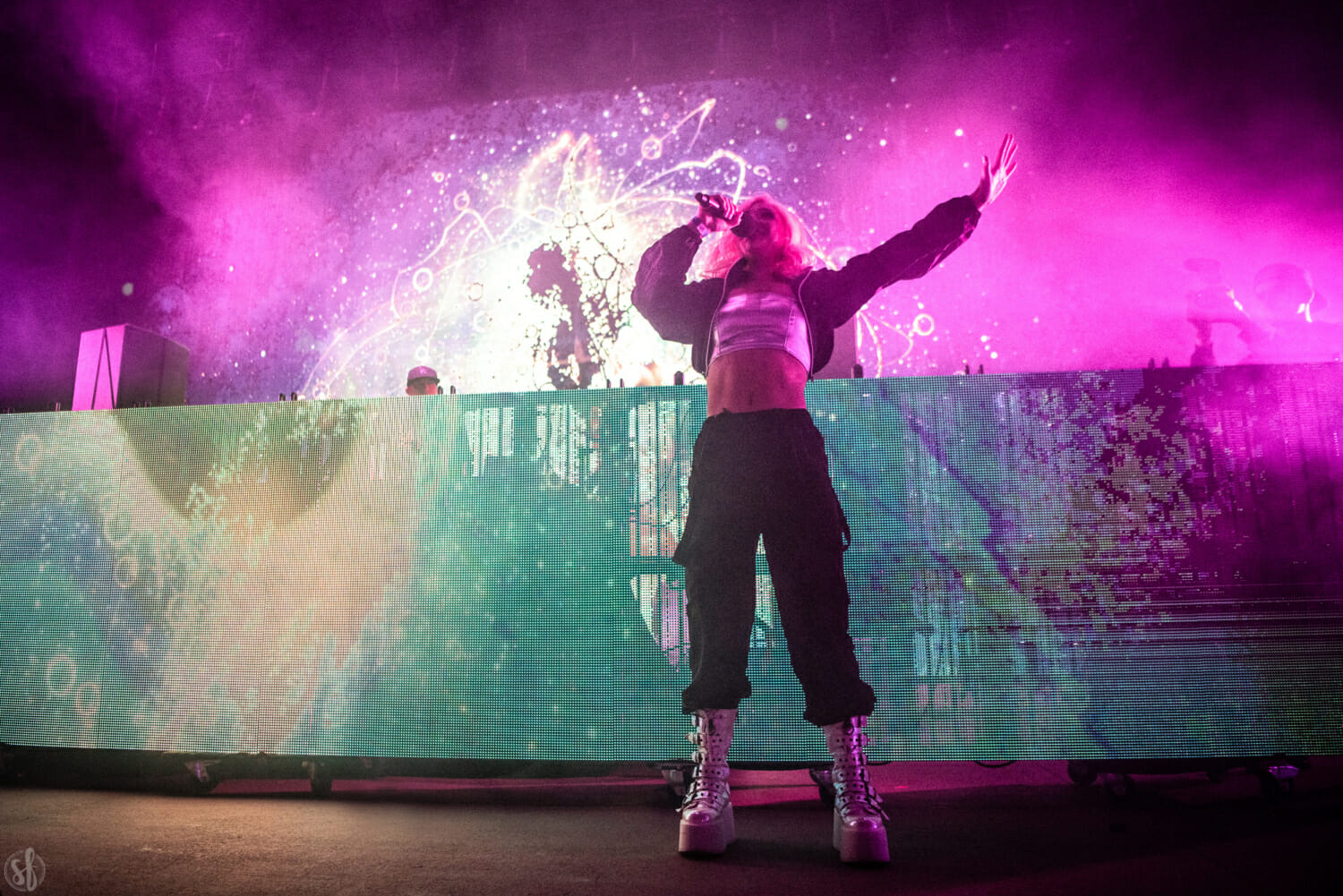 Supernovas is a recurring Dancing Astronaut feature dedicated to vocalists in the dance space who, with their own idiosyncratic vocal signatures and unique lyrical perspectives, have played pivotal roles in bringing electronic records to life. Each installment in the monthly series spotlights one vocalist. The serial continues with Supernovas 002: RUNN.

RUNN can’t remember exactly how the base of “Free Fall” landed in her lap, but she can recall a friend’s manager issuing this spoken invitation.

Her response was unambiguous: “Yes, absolutely.”

“Illenials,” of course, know how this story ends: in the fourth tracklisting of Illenium‘s sophomore LP, Awake, issued on September 21, 2017. But what they—and other listeners—might not know is that RUNN had never intended to earn credits as a vocalist on the Awake inclusion. Illenium, however, had other plans.

“I’d been a writer for many, many years and was very much a behind the scenes writer doing a lot of pop pitch work,” RUNN told Dancing Astronaut. Per serendipity’s—and Nick Miller’s—call to keep RUNN’s vocals on the track, then in the making, the singer-songwriter was not to remain “behind the scenes.”

“I wasn’t expecting that,” RUNN said. “I sort of stumbled into being an artist. I think it was always something I wanted to do, but was always too afraid to take that first step. And then it sort of happened so organically.”

“Free Fall” would be the push to set off a domino effect:

“It just gave me a place for my voice to be heard—not literally; but also, you know, literally—for what I had to say, instead of helping other people say what they wanted to say. And I found that incredibly empowering and fulfilling, and then when more opportunities came, I couldn’t say yes fast enough,” RUNN added.

Nearly four years later, RUNN has had a lot of practice with saying “yes.” Case in point, “Blurry Eyes” with Hotel Garuda (2018), “Nothing Left” with Wooli and William Black (2019), “Waiting For You” with Trivecta and Last Heroes (2020), “Intertwined” alongside Jason Ross (2020), and most recently, “Fix It” with Grant. That this is by no means an exhaustive list of recent examples bears mention.

Though RUNN will expectedly have more opportunities to answer in the affirmative when additional collaborative pitches find their way to her over this next year, she will also be focusing on her solo work to a large degree. “Strangely enough,” she says, she’s written some of her “best material” in the past year:

“It feels weird to say that last year has honestly been very clarifying for me where I was able to really focus on just my music and what I wanted to say and how I wanted it to sound and work with the people who are closest to me. So I was incredibly blessed to come out of 2020 with a large catalog of songs that I’m looking forward to putting out and I cannot wait for people to hear them, they’re all totally different.”

That the original productions implicated in RUNN’s plot for 2021 are “all totally different” is a byproduct of her writing approach. Over the years, she’s “continued to evolve and expand” how she writes, and during our interview, she’s careful to emphasize that writing, for her, is “never a one-size-fits-all” experience. Sit with her catalog and you’ll find that her music—solo outputs and collaborations alike—echoes this point.

Although RUNN cut her teeth in the pop field, its “formulaic” nature, marked by a “right way to do things and a wrong way to do things,” appeals to her considerably less than the “open-minded” quality of songwriting in the dance space. “There’s a lot less rules and structure, so it gives you a lot more space to be creative, which I find very freeing and refreshing,” she said.

The comparatively more amorphous character of dance music songwriting has allowed RUNN to continue placing a premium on authorial authenticity—the heart of her songwriting ethos. Throughout her tenure as a songwriter across genres, she’s realized the following: “the best songs for me are the ones that are the truest to me.”

RUNN’s arrival at this conclusion is owed in large part to her own experience as a songsmith, but it can also be credited to the artistic perspective of one of her sonic influences, John Mayer, whom she calls “one of the most unappreciated lyrical geniuses of our time”:

“I was at a masterclass with John Mayer a couple of years ago in college, and he said something that really stuck with me, which is the only thing you have the right to write about is yourself and your own experience. And so rather than projecting my brain into somebody else’s experience and trying to assume what they would feel, I just tried to really dwell within myself in past experiences, the current situation I happen to be in relationships with my own friends or family.”

These days, RUNN’s personal encounters, brushes with emotion, and realizations remain important informants of what will translate to a page and, eventually, a .wav file, even as she’s shifted the sequence of steps in the general scope of her writing process.

“I find that a lot of the time recently, I try to get on the microphone before I have even heard the music that’s been sent to me to write over, and I will just see what comes out,” she explained. “A lot of it is gibberish and mumble mouth and then sometimes I’ll say a word that ends up being the title or the theme of the song that I didn’t even know I needed to talk about. When you give yourself that kind of freedom, stuff just comes out that you know you need to process.”

In this way, songwriting for RUNN isn’t just cathartic; it’s also a barefaced check-in with herself that leads to the kind of “good” lyrical “story” that she referenced earlier in the course of our interview. “A good story is a good story, no matter what kind of music you put it on top of, and I think a compelling one can translate,” she said. Indeed, this is precisely what RUNN’s stories doubling as songs have done to date, and what they will continue to do: translate—and powerfully, at that.

Stream RUNN’s hand-curated Supernovas playlist featuring 11 of her songs below.

<< Saturday Night Session 046: James Kennedy talks his Ibiza upbringing and how being a reality TV star has impacted his musical journey Deconstructing ‘Anjunadeep 12’—the next wave artists behind the label’s most expansive compilation >>