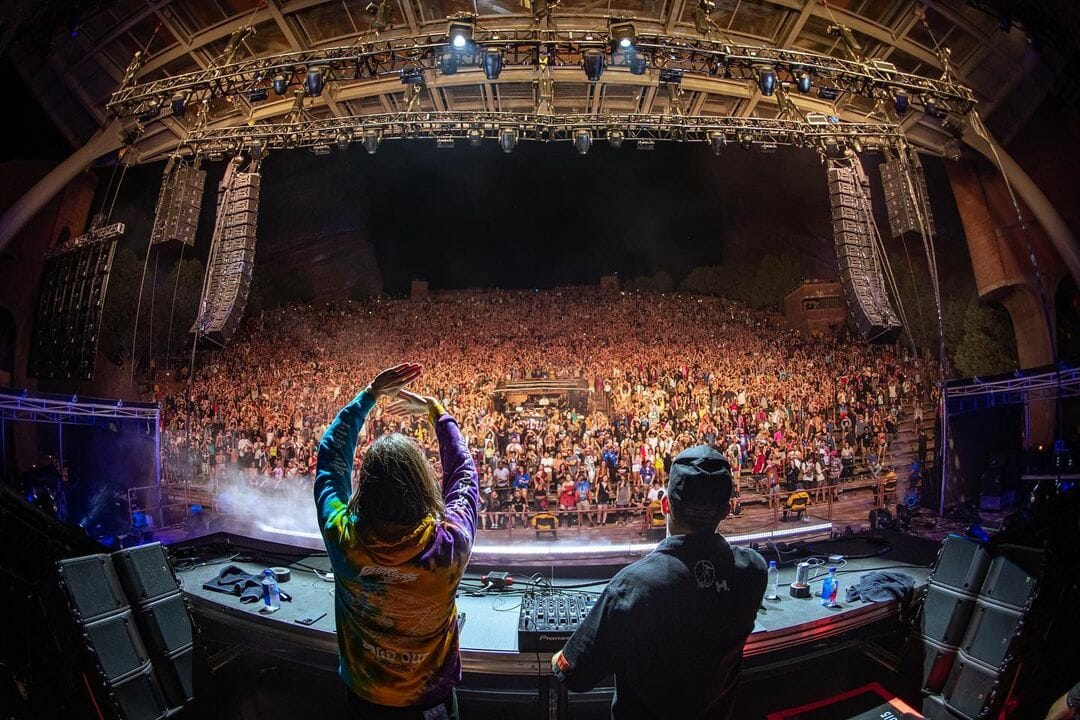 A year and a half later, Zeds Dead return to the stage for annual Deadrocks affair [Review]

The weather at Red Rocks Amphitheatre, stationed at the foot of the Rockies, can be temperamental at times. On July 3, a clap of thunder and light rain accompanied those who’d lined up outside the venue’s gates in a bid to snag the first few rows. On any other occasion, pre-show precipitation would be cause for complaint, but this time, the rain came as a welcome relief to Deadbeats fans, all of whom had hiked up Red Rocks’ steps in the midday heat with limited shade. A few threw on their jackets while the rest cooled down, the thrumming bass from soundcheck hinting at what could be expected from the night.

Amid it all, Zeds Dead‘s cult following buzzed in anticipation for the Deadbeats label heads to make their long-awaited return. Although many artists adjusted to drive-in shows as a means to maintain some semblance of normalcy and access live music over the past year, Zeds Dead opted to put a hold on all shows until venues were given the go-ahead to host shows at full capacity. In April, the pair attributed the decision to their desire to maintain the level of high production standards that they and their fans have come to expect from their performances. More than a year and a half would lapse before Zeds Dead would return to the stage; but on July 2, return they would, for the first show of their two-night Deadrocks run.

Long heralded as the mecca for Deadbeats events, Deadrocks was a fitting platform for Zeds Dead to take their first step back into live music. Marking their seventh time headlining the iconic Colorado venue, Deadrocks tickets sold out for each of the event’s two evenings within hours and remained difficult to come by, even after the 2020 event had been canceled due to COVID-19 health concerns.

By the time that the gates opened, the rain had let up, the Colorado heat subsuming it. As soon as tickets were scanned, audience members swarmed Red Rocks to snag their seats and save spots for friends running late. Framed by picturesque geography, the outdoor venue made it abundantly clear why Zeds Dead and fans were so eager to make their return to the famed live music site.

Despite concerns about Red Rocks being required to lower noise levels at the behest of residents’ complaints, fans standing at the top of the venue could still hear and feel the reverberating basslines shaking the ground. Those who had arrived early to snag seats in front were faced with ear-splitting sounds that welcomed them back to live music’s long-awaited return.

Greeted by fans who fervently threw their Z’s up as they bounced in time to the music, Zeds Dead’s Deadrocks-led three-day weekend married much of Deadbeats’ roster with four sets from the organizers themselves, as the back-to-back nights at Red Rocks were followed by a Fourth of July celebration in Denver’s Sculpture Park and an afterparty at the Mission Ballroom. Kill The Noise, Eprom, Habstrakt, Blunts & Blondes, Delta Heavy, Drezo, DNMO, ZEKE BEATS, GG Magree, Esseks, Rossy, Um.., Sippy, Chee, Jaenga, Chomppa, Rossy, Heyz, Sinistarr, and A Hundred Drums all took the stage in Colorado, showcasing what fans can expect as the Deadbeats Revival Tour continues while teasing what they’d all been up to over the past year and a half when stuck at home. Each set brimmed with the enthusiastic energy and disbelief that the day that everyone could gather again had finally come.

In addition to giving June 30’s “Alive” with MKLA a live underscore, Zeds Dead also teased a slew of new songs that they’d been working on, including a track with Blunts & Blondes, a single sampling Basement Jaxx’s “Where’s Your Head At” with Subtronics, and a hinted collaboration with Svdden Death.

On July 10, Zeds Dead will be make their way over to Arizona, where they will be joined by Subtronics, Rusko, Dirt Monkey, Lick, Level Up, and CHIIEF. Those eager to catch Zeds Dead by the end of the year can find the Deadbeats crew making stops in New York, Fort Worth, Minneapolis, La Cygne, Kapolei, Los Angeles, Seattle, Toronto, Detroit, Salt Lake City, San Jose, and Washington, DC., with more shows expected to be announced over the coming months.