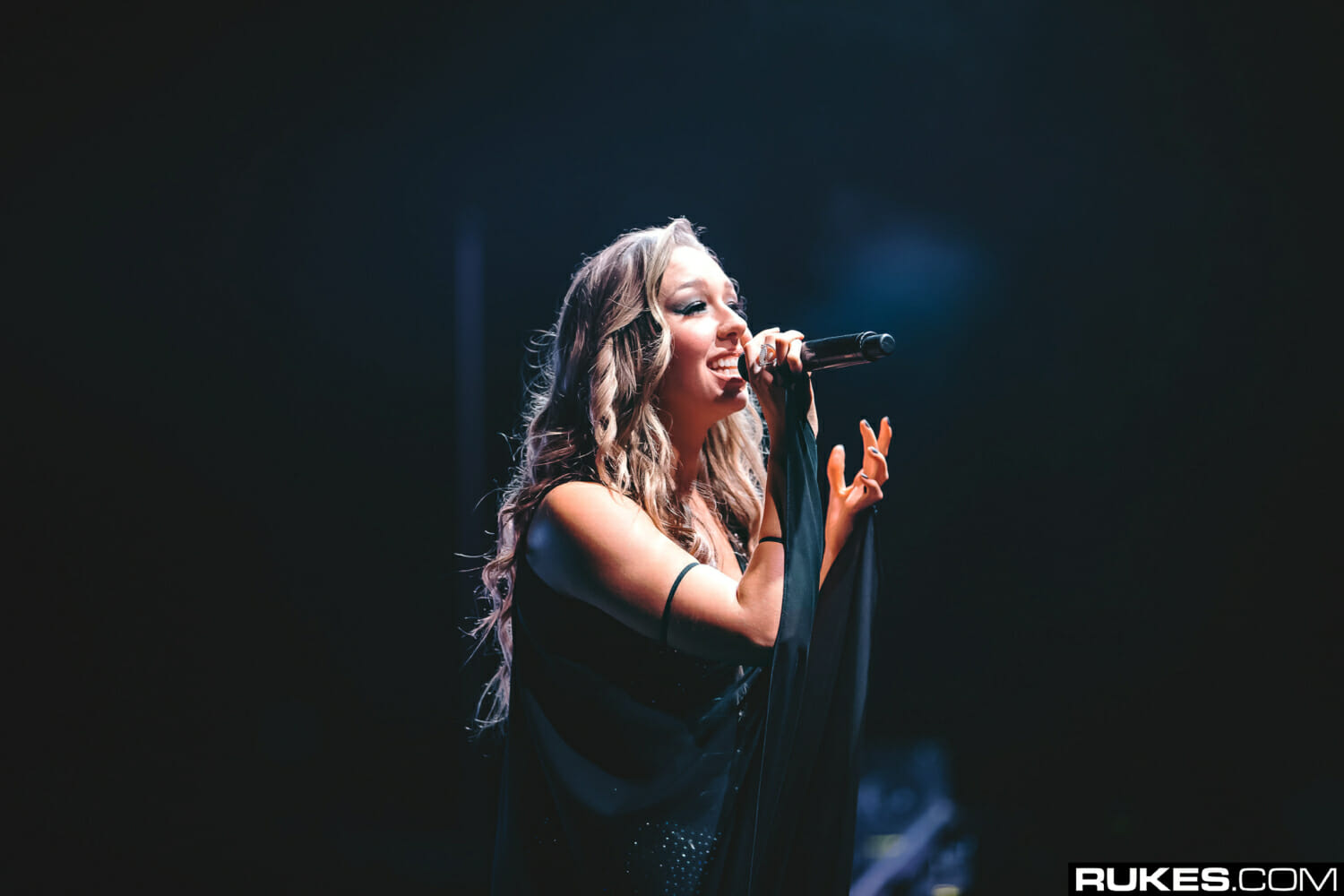 From October 22 – 24, Insomniac‘s flagship festival—Electric Daisy Carnival Las Vegas—will celebrate 25 years under the electric sky with more than 200 of the electronic genre’s finest, spread across eight different stages. A paragon of genre fluidity, EDC Las Vegas’ 2021 lineup meshes industry veterans with some of the scene’s standout up-and-comers for a diverse roster of talent that offers sounds for every palate. Ahead of the milestone weekend, which will mark the Pasquale Rotella-led event’s return to the Las Vegas Motor Speedway, Dancing Astronaut presents its 2021 EDC Las Vegas All-Stars.

The cast of Dancing Astronaut EDC Las Vegas All-Stars encapsulates a smattering of acts who earned recognition in 2020 as part of our end-of-year content series, such as Moore Kismet, who was named our 2020 Breakout Artist of the Year. The list also encompasses those named in our Artists to Watch in 2021 series who, true to our curatorial call at December 2020’s conclusion, have proved their right to said recognition by securing spots on the festival’s 2021 lineup. Artists who have earned other Dancing Astronaut honors, like April Supernova HALIENE, are also included.

Dancing Astronaut EDC Las Vegas All-Stars is intended to illuminate just some of the artists we’ve championed through concept-driven feature series produced over the past year or so. See them below.

Catch him on: October 22

At the tail end of 2020, Dancing Astronaut‘s Social Media Managing Editor Ross Goldenberg added Bleu Clair  to our roundup of 25 Artists to Watch in 2021. At the time, the Indonesian producer had made two outings on Martin Garrix‘s STMPD RCRDS (“Need U” and “Make You Mine,” alongside Garrix’s alter-ego, Ytram). He also picked up placements on Monstercat and Insomniac Records, and these early looks from esteemed industry fixtures were enough to win him consideration for the 2021-facing collection of future electronic achievers. Add in mention of Bleu Clair’s forward-thinking, four-on-the-floor-guided house fluency, and just like that, all signs pointed to his ensuing success in the dance circuit.

It’s a pick that’s aged well, to say the least. His February return to STMPD alongside OOTORO, “Beat Like This,” has been the stuff of the inescapable, surfacing in other artists’ streamed and in-person sets since its release. In 2021, he’s appeared again on Insomniac Records (see “Amani” with Jargen, “Have Me All” featuring Jelita, and his remix of Habstrakt‘s “Gotta Be“); made his name known to Tiësto‘s Musical Freedom, thanks to “Green Light“; collaborated with Matroda (cc “Disco Tool“), landed on Box of Cats with “Gold“; and even returned to Monstercat, “The Tempo” in tow.

In short, it’s been a whirlwind of a year for a gold-star artist then in the making, whom we happened to spot before that glint was as immediately apparent as it is now. For the house heads, Bleu Clair is a can’t-miss at EDC Las Vegas’ anniversary edition, and ticket holders can catch him on October 22.

From his “my life is a bender”-themed antics to his tech-house head turners, John Summit has been an immovable facet of the electronic context since “Deep End” sent him hurdling headfirst into the scene in June of 2020. Dancing Astronaut‘s Partnerships Manager Natalie Pereira recognized him as an up-and-comer with red-hot potential at the close of the past year, and he’s done more than just prove that he deserved such designation.

Summit’s unremittingly sold out venues across the country in 2021 while rubbing shoulders with esteemed acts such as Vintage Culture and Sofi Tukker. With eight productions to his name this year to date—including the embraced “Make Me Feel“—and a never-ending stock of IDs publicized on his social platforms, Summit has earned his status as a name that we all just can’t seem to stop seeing this year.

In a nod to his white-knuckle grip on the dance space and the general clamor for a live Summit set, he’s nabbed not one but two slots at EDC Las Vegas. Attendees can see him work his no-fucks-given magic on October 22 and October 24, and as Dancing Astronaut is already predicting, they’re sure to be highlights of the commemorative weekend.

Catch her on: October 24

At 2020’s finale, Dancing Astronaut Staff Writer Sami Weisband proclaimed Qrion—born Momiji Tsukada—a house dignitary poised to rise to the top of house music’s highest echelon. Qrion’s steadily worked to scale her way to its apex in the nine months since, and that she deserves a spot there is readily apparent.

About a year ago, Qrion could be found making the rounds at Moving Castle, Mad Decent, and Anjunadeep while securing TOKiMONSTA‘s support. These were all positive omens that served as the preludes to continued sonic achievement for the producer, who announced her forthcoming debut LP, I Hope It Lasts Forever, in mid-September. But as far as a summary of her 2021 activity goes, that’s merely a scratch on the surface. The year’s seen Qrion star alongside  Spencer Brown on “Rainy April,” grace LNOE Introducing Vol. 1, issue several remixes, and most recently, an original by the name of “Your Love.”

Cumulatively, these engagements draw attention to Qrion’s range of musical possibility while proving what we’ve known to be true for quite some time: she cannot be pigeonholed. Another truth? Her EDC Las Vegas performance ought to rank high on ticket holders’ priority lists.

Fellow Dancing Astronaut Artists to Watch in 2021, KLOUD and Lucii, will also take to the EDC Las Vegas stage on October 23.

Catch her on: October 22

In January 2021, Dancing Astronaut unveiled Supernovas, a recurring feature dedicated to vocalists in the dance space who, with their own idiosyncratic vocal signatures and unique lyrical perspectives, have played pivotal roles in bringing electronic records to life. In April, we profiled a singer-songwriter who’s done just that: HALIENE.

2021 has been a year of momentous strides forth for HALIENE, who recently took to the stage at Seven Lions‘ Chronicles III festival (at the Gorge Amphitheatre) in solo fashion to show off her chops. Come October 22, she’ll singularly step on to the big stage at EDC Las Vegas. That HALIENE will have laid claim to the individual performances by the end of the year is a testament to her talent—after all, it’s rare for a singer-songwriter to win such stage time, considering that the slots are overwhelmingly occupied by DJs. The appearance represents an invaluable opportunity to not only see the “Oceans & Galaxies” and “Anywhere” artist live, but also bear witness to a paradigm shift pertaining to the presence of a singer-songwriter in the electronic/dance industry. Dancing Astronaut will be there—and you should, too.

Catch them on: October 22

On November 30, 2020, Dancing Astronaut crowned Moore Kismet its 2020 Breakout Artist of the Year. The tastemaker, a 15-year-old with raw talent and the focus to apply it, was a force to be reckoned with in 2020 and in the time that has followed, the strength of this force has amplified with a fury. In less than one year’s time, Kismet’s gone from notching performances at Insomniac’s BackHARD Summer BBQ Virtual Rave-A-Thon, and Night Mode Livestream to commanding stages at some of the highest-profile festivals in existence. Now 16, Kismet made history at Lollapalooza‘s 2021 installment, becoming the youngest artist to play the event. The milestone will be realized again at EDC Las Vegas.

In between reaping in 2021 what they sowed in 2020 on the live performance end, Kismet continues to redefine bass music while racking up career milestones. Case in point, in February, Kismet announced a new record deal with Thrive Music, which will distribute their forthcoming debut album. Kismet’s never been more ready for primetime or, synonymously, for one of the most prominent electronic festivals that a producer could ever hope to play at, and what’s to be seen when Kismet takes the stage at EDC Las Vegas will be nothing short of spectacular come October 22.

Catch him on: October 22

When the father of future-house bequeathed Year Zero on October 23, 2020, we didn’t need divine intervention to recognize it as one of the year’s finest extended projects, so much so, in fact, that it took 2020 Album of the Year honors. The LP, which went on to receive a companion album of remixes in June, descended on streaming platforms at a time when dance floors remained vacant, and though music enthusiasts across the nation have since returned to them, a bevy of streamers still have not seen Year Zero in its unwieldy live form. Tchami was the first set that the author of this feature attended once live programming resumed, and Rachel Narozniak can attest that the Confession label head’s EDC Las Vegas stint should take precedence on attendees’ schedules, no matter the conflicts that might present upon the release of set times. To see Tchami shuffle through Year Zero‘s tracklistings—among the tried-and-true catalog staples that ushered him to his position of prominence today—is to see the priest collar-clad producer at his most deft. Don’t miss it.

Although Year Zero took the 2020 Album of the Year crown, it wasn’t the sole LP to win Dancing Astronaut‘s praise last year. Fellow industry fixtures such as Lane 8, who notably took the title of 2020 Artist of the Year (#2, Brightest Lights), Whethan (#5, Fantasy), Kygo (#6, Golden Hour), Louis The Child (#7, Candy II [Beat Tape]), and JOYRYDE (#12, BRAVE) ranked high on our list of the Top 20 Electronic Albums of 2020 and can each be seen at respective EDC Las Vegas time slots.

Whethan and Louis The Child will perform (separately) on October 23. Lane 8, Kygo, and JOYRYDE will appear on October 24.