Held annually on the downtown streets of Las Vegas, the Life is Beautiful Music & Art Festival will return for its fifth year September 22-24, 2017. Organizers officially revealed their star-studded lineup on April 25, making the case for the Life is Beautiful as one of the year’s most anticipated, multi-faceted fall events.

The festival also brings back the Art Motel installation, which will be re-imagined by Santa Fe’s immersive art collective, Meow Wolf. Returning for the second year is “Crime on Canvas,” an exhibition of original artwork by prominent local, national and international artists, including Matt Skiba, Mark Ryden, Tara McPherson, Brandon Boyd and many more.

A limited amount of advance three-day passes will be on sale beginning this Thursday, April 27. 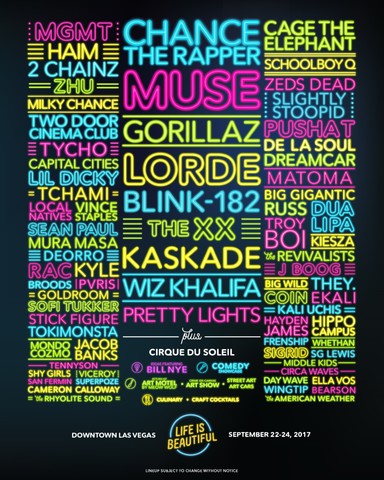